Visit Rhodes, the largest and most WOW Dodecanese island

The capital of the Dodecanese islands, Rhodes is known as the island with the endless summer, because of its mild climate and many days with sun.

It is one of the 1.000 Greek islands spread in the Aegean Sea and is a good point to start your Greek adventure.

Here are 3 reasons why you should visit Greece for your summer holiday: famous beach hotels, ancient ruins and interesting scenery.

Of course, there are many more others and we will show them to you in this article! 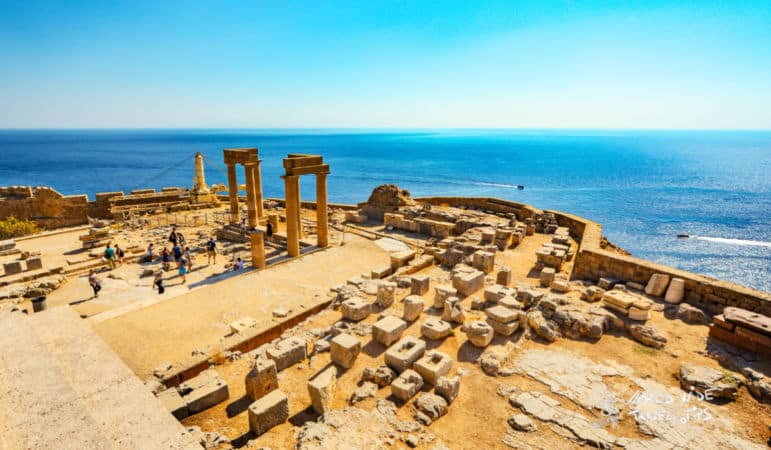 27 Nov: Is the weather in Rhodes May warm enough for a bathe? 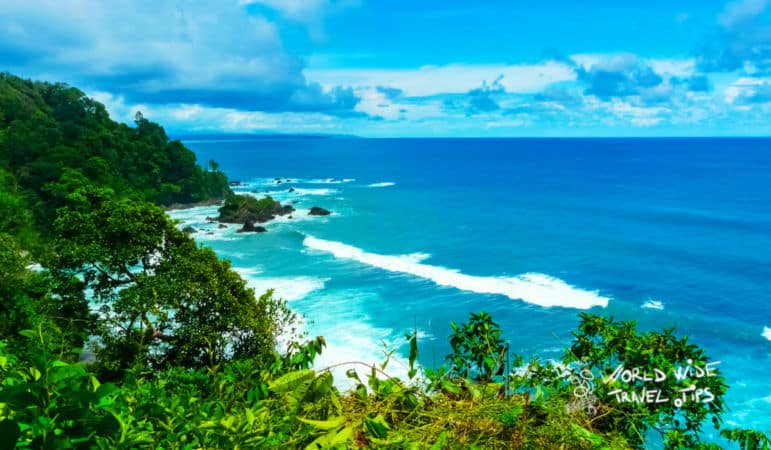 Corcovado National Park Costa Rica is located in the Osa Peninsula and is considered to be among the best places in Central America for observing wildlife in their natural environment. The famous…

The island was inhabited since ancient times.

Around 1600 BC the historical chronicles tell us stories about mysterious Minoans who inhabited the island.

Unfortunately, there is not much information about this civilisation.

The next inhabitants of the island were called Telchines, who was on the island until Mycenaean Greeks invaded the place.

This is the period when myths and tales were born.

Great temples and teachers were the centrepieces of the period and many ruins dating from that time can still be seen in our days.

The island was invaded then by Persians, who were defeated by the Greeks from Athens.

Because of its strategic position, the island was invaded many times and had different leaders.

Starting with 332 BC, the island began to rise and impose as an important maritime and commercial centre.

If you visit Greece you will find many remaining from that time!

After the invaders have left, the military equipment was sold and with the money gained the people of Rhodes built a huge statue, the Colossus of Rhodes, one of The Seven Wonders of the Ancient World.

The statue was destroyed during the earthquake from 226 BC.

From ancient times to our days, Rhodes was under many occupations including Byzantine occupation, Turks occupation and in 1912, the island was taken over by Italy from the Turks.

During World War Two the island was used by Italians and Germans as a garrison.

In 1947, Rhodes became part of Greece and remained under Greek occupation until now.

How to get to Rhodes

Now that we know a little about the island’s history, let’s see how you can get to Rhodes!

Well, it is an island in the middle of the sea, so there are not that many options to get to Rhodes.

If you want to visit Rhodes you need to get a ferry or a plane.

With Ferry to Rhodes

The port of Rhodes has daily connections with Athens Piraeus.

A trip lasts for about 12 hours and on most ferries, you can transport cars.

There are no direct routes from Athens to Rhodes; along the route, there are three stops in Leros, Kos and Kalymnos.

Rhodes have direct connections with other islands from Dodecanese, Crete and Turkey.

On the island, there are four ports, three are located in Rhodes Town and the fourth one is on the opposite side of the island near ancient Kamiros.

The ferry trip is very relaxing and is a very exciting experience, but you need time for island hoping.

Locals are ferry’s loyal customers mainly because the trips are very affordable.

With a plane to Rhodes

When you visit Rhodes, you have to know that there are many flights to Rhodes airport, most of them from Athens and some other big European cities.

The flight tickets are much more expensive than the ferry, but you will arrive faster at the destination.

Getting around Rhodes has never been easier! You can choose to travel by public transport, car rented or taxi, depending on your preferences!

With a rented car you can explore the whole island!

You can reach untamed beaches and many other beautiful places untouched by tourism.

You can get a good sense of the local traditions and habits by going to places less frequented by tourists.

You don’t have to worry about road conditions!

On the island there are four major arteries which connects the most important towns from the island.

There are buses which travel to main places from the island, so it is a good idea to visit Rhodes by bus.

The price tickets may vary from a few euros to a few dozens, depending on the distance.

The tickets could be bought from bus station kiosks, minimarkets and other kiosks from the island.

The bus timetable is public and can be found on the public transportation site or in the bus stations for the buses that travel in that area.

Rhodes taxi stations could be found in designated places all over the island or you can call a cab if you have a number.

The prices are reasonable and the transportation conditions are generally very good.

We ended up using the same taxi driver when visiting Rhodes because it was much comfortable and simple.

We got his phone number and called him whenever we needed.

The most comfortable way to visit the island is by car. Car gives you the freedom and flexibility such needed for a relaxing holiday.

Rhodes is known as the “island with endless summer” because of its warm climate and many sunny days.

All year round the temperatures are positive, the main inconveniences are represented by the wind and rain, which during winter are pretty often.

In summer there are no rains between June to August, so you can plan your trip whenever you want during this period and for sure you will have a wonderful holiday.

That is why June, July and August are considered the best period to visit Rhodes. These are the most crowded months of the year.

Tourists are everywhere and the prices go really high.

Me personally, I always choose to visit a destination during shoulder season, not peak season.

The prices are lower, there are fewer tourists, so you can enjoy your time better.

Shoulder seasons are September and October, April and May.

My advice is to go to Rhodes in May or September, because the days are perfect for bath and the prices are lower than in peak season.

Find out more about Rhodes Weather

Is the weather in Rhodes May warm enough for a bathe?

Weather in Rhodes in May, pros and cons for visiting
Read More

Places to visit in Rhodes

Although a pretty small island, Rhodes has many attractions.

No, I am not talking about the Colossus of Rhodes, because this statue doesn’t exist anymore.

There are many other interesting places full of history on the island. I would like to name some of these places which should be on your travel list.

The first one on your visit Rhodes list is The Acropolis of Lindos, which is the second important Acropolis from Greece.

It is located near Lindos and is one of the most visited places on the island.

If you are in Rhodes Town than you should include on your itinerary the Acropolis of Rhodes, which is an impressive ruin and reflects the glory of the old times.

I would also like to mention the Ancient Kamiros and Ancient Ialysos which are two ancient cities, who formed together with ancient Lindos the powerful city-state of Rhodes.

Yes, Rhodes is not just history! It is also about nature, beaches and entertainment.

I am sure you’re gonna love them all! 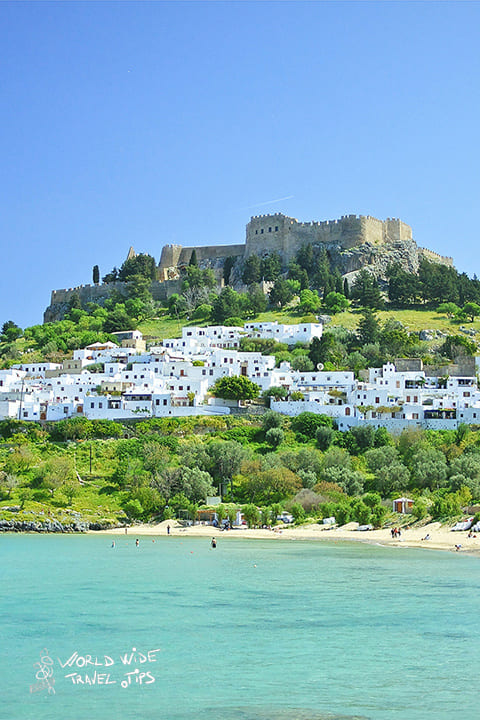 Things to do when visiting Rhodes

Rhodes offer many interesting ways to spend your time while in vacation.

I will tell you which are the best options to spend a day on the island, and I let you choose which are fits you best.

No matter if you rent a car, take a taxi or public transport, Lindos town should be the first thing to see when in Rhodes.

It is one of the most picturesque places from the island, and impresses with its charm and beauty. 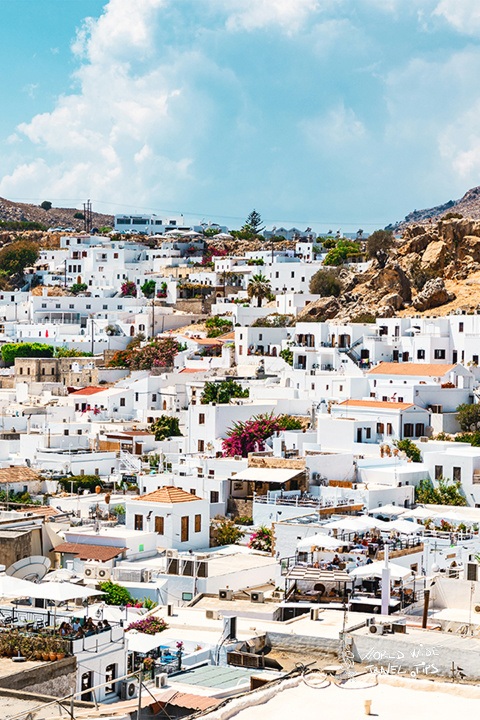 A day at the beach might be boring, but a day in a waterpark equals fun.

Inside the park, there are many options to choose from: open and closed slides, kamikaze slides or twister slides all of them are built for you to have fun.

And when you get tired of all these crazy things you can rest in a sunbed near one of the pools.

4. Have a sunset at Acropolis Rhodes

Not just it is wonderful, but it is also free!

The place is visited mostly by people passionate about history and by photographs!

It is one of the best place from the island to admire the sunset! 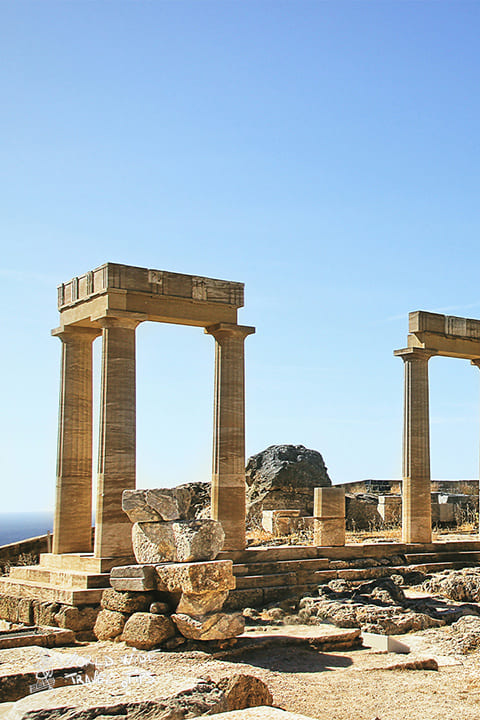 5. Paddle surfing in the east

Water sports fans don’t be upset! I have something for you!

Why don’t you try a paddle surfing in the east part of the island?

It will be a very relaxing and memorable experience!

Where to sleep when visit Rhodes

There plenty of accommodations spread across the island.

From hostels to fancy hotels all-inclusive with private beach and beautiful outdoor pools you can find everything you want on this island.

We want to spoil ourselves and we decided to stay at an all-inclusive hotel with wonderful outdoor pools, great sandy beach and beautiful rooms.

If you are looking for a beach resort with great services and tasty food, then this is the right choice.

If you are not so into the all-inclusive regime, no worries!

There are plenty of other options!

The Surfer’s Home from Rhodes Town is a great choice for tourists looking for a cosy home with a very unique and interesting design situated within a walking distance from all major Rhodes attractions.

Or if you are looking for a great vacation home located in the most picturesque town from the island, Lindos, then we recommend you to try Lindos Beach Boutique Villa.

Located right in the centre of the town, right near the beach, this wonderful villa offers everything you need for an unforgettable holiday: a fully equipped kitchen, 2 bedrooms and a pool with a view. Perfect for your holiday!

Rhodes is one of my favourite Greece islands. It has a special place in my heart and I know that there is always another thing to discover each time I visit this place!

It is a unique island which offer many opportunities and many great ways to spend your holiday!

Find more interesting things to do when you Visit Rhodes

How’s the weather in Kiotari Rhodes in May this year?
View all articles