Rhodes is the fourth largest Greek island and one of the most important tourist regions of the country mainly because the weather in Rhodes May is the best for an early summer holiday.

The island has about 870 square miles and is located in the Aegean Sea only 6 miles from the Turkish coast.

The highest point from the island is represented by Mount Attavyros with a total height of 1215 metres and the landscape in the interior of the island is very mountainous.

Rhodes weather end of May

The weather in Rhodes is a key factor for the touristic success of the island, with many sunny days across the year.

Actually, this is one of the sunniest places in Europe with more than 3.000 hours of sunshine each year. 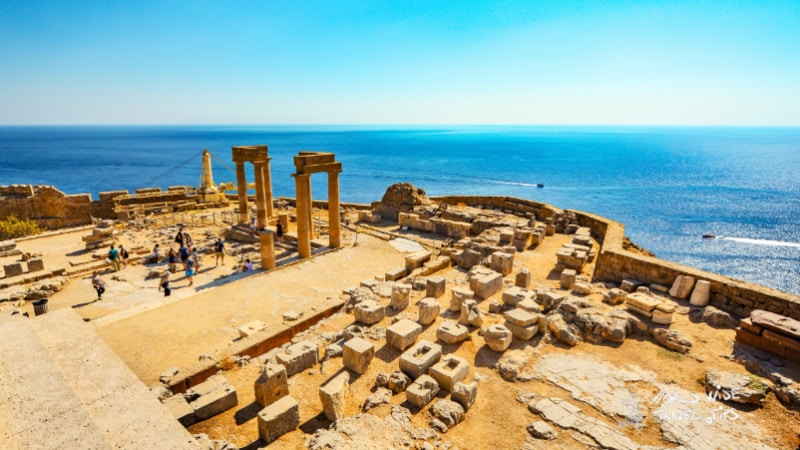 Weather in Rhodes May Lindos

The good news is that there are 0 days of rain during July and August and up to 5 days of rain per month from April to September.

The winter months of November and February are considered to be the rainiest ones with up to 10 days of rain each month and many more cloudy and windy days.

Once the spring arrives, the temperatures start to rise and the days become less cloudy and with fewer days of rain.

Weather in Rhodes May is perfect for exploring and even sunbathing as the temperature goes up to 24 degrees Celsius.

May is considered to be the last month of spring and is generally a warm month with an average temperature between 16 degrees Celsius and 24 degrees Celsius.

Mornings and evenings are a little bit cooler so you’d better take a sweater with you if you plan to stay a little bit longer outside, listening to the calming waves splashing to the shore.

Because of the decreased numbers of rainy days, Rhodes weather end of May is perfect for sightseeing and exploring.

With less than 5 days of rain and about 19 mm of precipitation, May weather is also perfect for sunbathing and perfecting your tan.

Swimming in the sea is not that enjoyable for most of you as the seawater temperature is around 20 degrees Celsius.

The average hours of sunshine in May is 14 hours, while the average daily maximum UV index is 8.

A UV from 8 to 10 symbolizes a very high health vulnerability so try to avoid staying in the sun at midday and without using any sun cream.

A hat is also mandatory to have with you when you stay in the sun especially between 10 a.m. and 4 p.m when the UV radiation is most powerful. 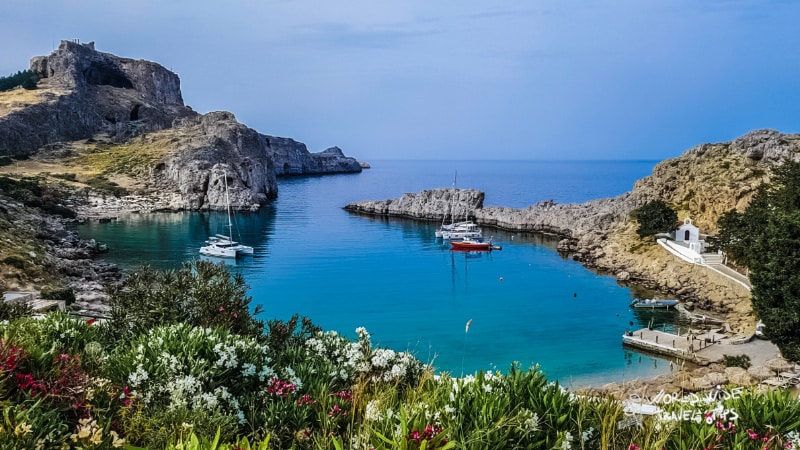 Rhodes weather end of May Lindos

Starting with the second part of June, the temperatures rise above 30 degrees Celsius with the west coast being a little cooler than the east coast. In some days, the difference between these two coasts might be up to 7 degrees Celsius.

Is the weather in Rhodes May warm enough for visiting?

The season on Rhodes in Greece starts by the end of May and lasts until November when the bathing temperatures are higher.

To be honest with you, not just the Rhodes weather in May is perfect for visiting and perfecting your tan but also the prices are lower and the crowds haven’t arrived yet.

This means that you have the island more for yourself and going to Rhodes during this time of the year gives you the opportunity to see how locals actually live.

I would definitely recommend you to visit Rhodes in May, especially in the second part of the month as you have lower prices there is extremely good weather in Rhodes in May.