I am sure you are wondering where is Amsterdam on the map and this is the main reason why you are searching the internet this time.

Amsterdam is located in the north-west part of Europe between Germany in the east, the North Sea in the north and west, and Belgium in the south.

It is the capital of the country and the seat of the Dutch Government; it is located in the province of North Holland, being also the most visited place within the Netherlands.

Amsterdam is the cultural capital of the Netherlands because it is home to many famous museums ( Vincent Van Gogh Museum is the most famous museum in Amsterdam), two universities, and an amazing orchestra.

More than 4 million tourists from all over the world come to see the old city center’s architecture and the beautiful canals and are excited to visit the museums and the surrounding area.

The liberal life from this amazing city is another element which attracts tourists from all over the world looking to party and experience things which in other countries are forbidden. 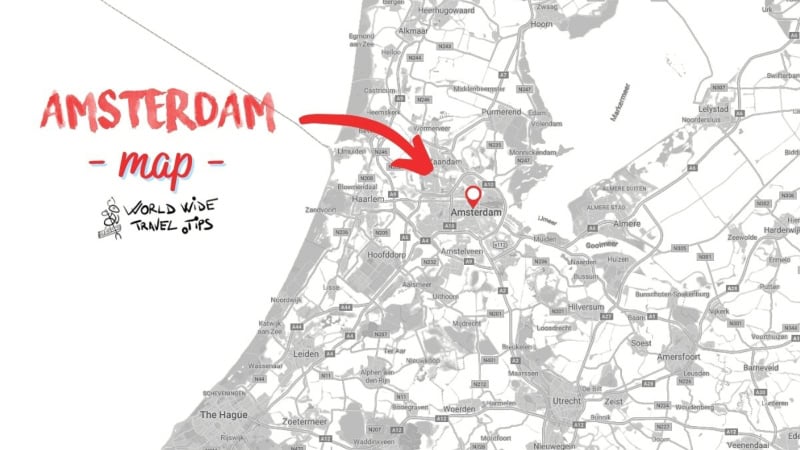 Where is Amsterdam on map

Where is Amsterdam on the map

On the map, the beautiful city of Amsterdam is located at 52°22′ north latitude and 4°53′ east longitude (meaning over 52 degrees north of the Equator, which is 0 degrees, and 4 degrees east of London, which was once defined as 0 degrees).

Most people use to call the Netherlands Holland but this is wrong as Holland refers only to the western provinces of North-Holland and South-Holland, not to the 12 provinces which form the country.

The inhabitants of the Netherlands country are called dutch and their national currency is the euro.

How to get to Amsterdam

You can get to this wonderful city from any other place in the world by train, car, or plane.

Getting to Amsterdam by train

The easiest way to get to the Dutch capital from London for example is to take the Eurostar and in less than 7 hours you get to this magnificent city.

Until October 2020 there were no direct trains from London to Amsterdam but now in less than 5 hours, you reach your destination.

This amazing city has a large number of direct international rail services that connect this city with Belgium, France, Germany, the UK, and beyond.

High-speed trains which travel in Europe are among the best alternatives to flying or driving and give you the real feeling of travel.

Check below to see the international rail network for high-speed trains operating to and from Amsterdam Centraal, the main station of this city. 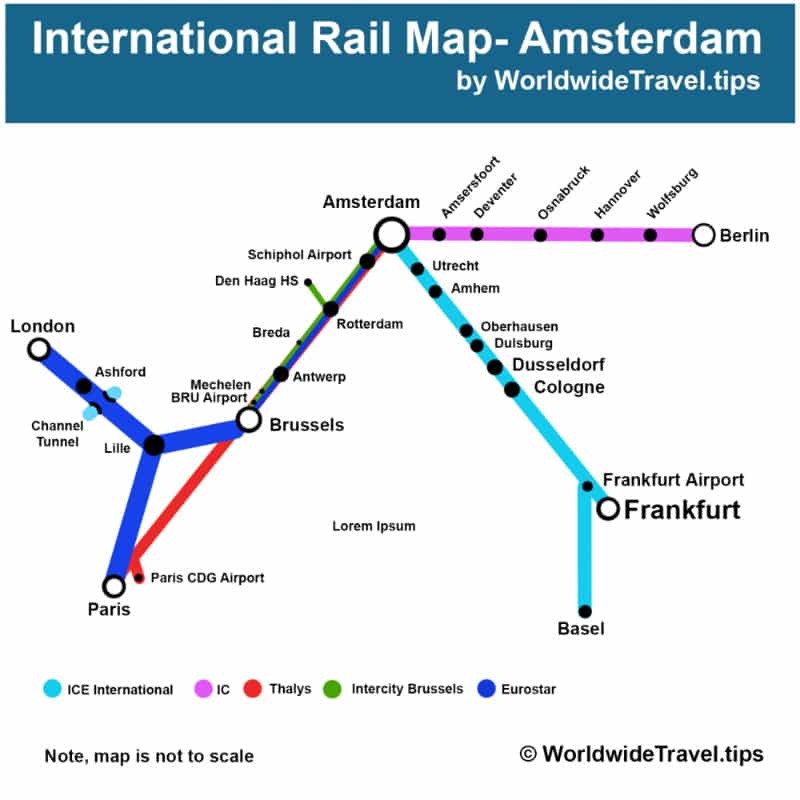 From where is Amsterdam on the map you can easily reach by train Paris or Frankfurt but also, Berlin, London, Brussels and Bassel.

Getting to Amsterdam by plane

Getting to the capital of the Netherlands by plane is one of the easiest ways but sometimes it is more expensive than train tickets.

It is located 9 kilometers southwest of the city and it has great connections with the Amsterdam city center.

There are numerous flights to and from this airport with more than 100 airlines companies bringing tourists from all over the world.

The national Dutch airline, KLM which is considered to be the largest airline ground in the world is based at Amsterdam airport. 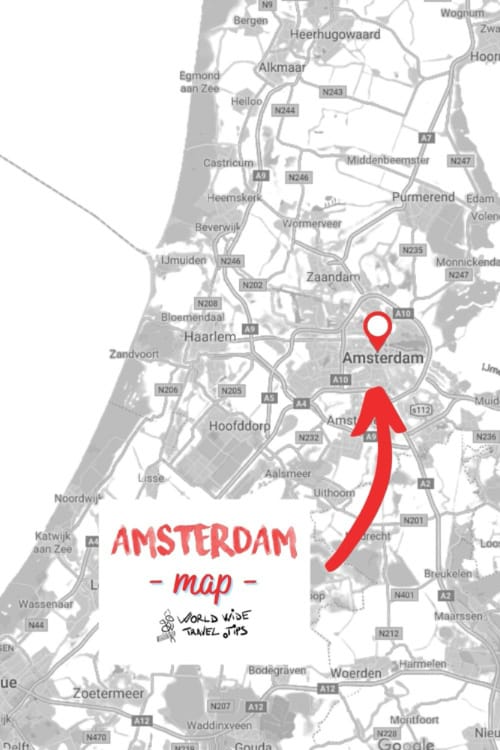 where is Amsterdam on the map

There are several hotels at and around Schiphol airport, including two transit hotels in the terminal building itself.

Sheraton Amsterdan Airport Schiphol is conveniently located near the airport and 20 minutes train ride from the city center, making it the best place to stay for those who have a morning flight or are just in transit.

For those of you looking to get from the airport to the city center, the easiest and most comfortable way is by train.

There are direct trains to Amsterdam Central Station and the train ride lasts for about 20 minutes.

From Amsterdam Central, you can take the high-speed trains indicated earlier in this article and reach some of the most important cities of Europe.

Getting to Amsterdam by car

Where is Amsterdam on the map makes it a very popular destination which should be included in your tour across Europe.

If you come from London then you need to drive to Dover and from there pass the sea to Calais and follow the GPS up to the Dutch capital.

In about 7 hours you will reach your final destination, Amsterdam from London, but the time might vary depending on traffic and road conditions.

I personally don’t recommend you to travel to Amsterdam by car as parking in this city is pretty expensive and it is also difficult to find a free parking space.

The best way to experience the flavours of this country is the train and where is Amsterdam on the map makes it easier to find great connections all across Europe.

So, what are you waiting for?!

Now you know where is Amsterdam located on the map and how you can get there quickly and safely!

Pack your bags and hit the road as many museums and attractions are waiting to be discovered!