Plovdiv Bulgaria is the second-largest city in Bulgaria after Sofia (the capital of the country). It is an ancient city in the south of Bulgaria built 4000 years BC.
Here you can find the largest rowing canal in the Balkans where major international rowing competitions like 2011- Men’s and Women’s European Rowing Championship were held.

In 2019, this fantastic city was named European Capital of Culture.

This is a good reason to include it in your “must-see places” list. If you are in the area or if you are looking for a more than affordable city break then this city is the best European city break choice.
We spend here 2 days but when we left we had the feeling that we want to come back to discover more about this hidden gem of Bulgaria. 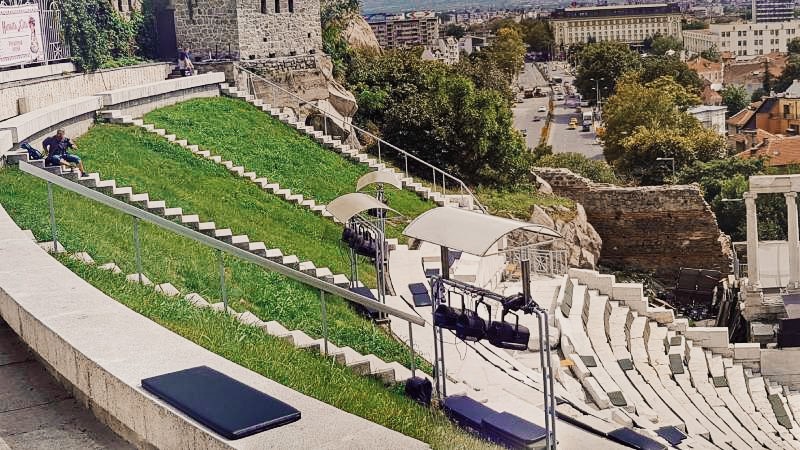 How you get to Plovdiv Bulgaria

The city has an airport for domestic and international flights. You can also land at Sofia Airport. From Sofia, you can rent a car, take public transport or a private transfer. Between these two cities, there is 145 km on A1 highway so in about 1 hour and 30 minutes you are in Plovdiv.
Are you planning a trip to Plovdiv?

Where to eat in Plovdiv Bulgaria

Since you are in Bulgaria you should not miss the occasion to try their traditional food. The best place to try their local cuisine is to eat at a mehana. Generally, at a mehana the food is delicious, fresh and the portions are big enough for everybody. And in this ancient city, there are plenty of options to choise from.

There are plenty of options depending on what you are looking for: 5-star hotels or studio apartments, modern or old decorated rooms. The accommodation is cheaper than in Sofia but more expensive than in most Bulgarian places.
We chose to stay at a 4-star hotel near the rowing canal. The room view over the canal was just incredible.


Are you planning to visit Plovdiv? See which are the available options for your stay

Top 5 reasons to visit the 2019 European Capital of Culture

There are many ancient attractions spread within the city area. For sure you should not miss the following:

Situated in the old town, this is one of the largest and well-preserved place dating from Ancient Rome situated in the Balkan area. It has approximately 240 m (790 ft) m long and 50 m wide and could seat up to 30000 spectators.

The place was discovered in 1923 by the archaeologist Liliya Botusharova.

Roman Stadium is located under the main pedestrian street. A large portion of the stadium still lies buried beneath the buildings along the main street. Part of the Stadium has been restored and now it is one of the landmarks of the city.
There is no admission fee as you cannot go down. You can take photos from the street level of Plovdiv Bulgarian.

This is one of the world’s best-preserved Theatre dated from Ancient periods. It was built in the 1st century AD. It is located in the old town.
The theatre capacity is 5000-7000 spectators and it is in use even today during the summer months.
If you want to visit the site you should pay an admission fee. If you travel on a budget and you just want to take some photos from the street level -it is possible without paying the fee.

This is the creative district of the city. Almost all the streets of the district are included in the pedestrian area. Here you can find galleries, studios, shops, restaurants, etc.
Another important aspect is that in the past this area was craftsmen center; so due to this, most of the streets have representative names: Kozhuharska (Leather Street), Zhelezarska (Iron Street) or Zlatarska (Gold Street).
In my opinion, this is a very beautiful place to get lost in and forget about all your problems.

Hisar Kapia is a medieval gate in Plovdiv Bulgaria old town. The gate was dated from the 11th century AD. It is supposed to be built over the foundations of a gate from Roman times (probably from the 2nd century AD).
Craft Center “Bakalova House”
This is a traditional Bulgarian home used for craft and art, being a good opportunity to see the process of making art ceramics, jewelry, etc. It is located in the northernmost part of Dr. Chomakov street.
If you want to see how people’s homes looked like and how things are traditionally made, then this is the right place to go.

The Cathedral was built in the IX- X century and was dedicated to the Mother of God.
This is not a classic Orthodox Church with a lot of gold on the inside! This is a very modest and beautiful church and if you have time you should include it in your list.

Plovdiv Bulgaria is a very beautiful and picturesque city. It is the perfect destination for a European city break. And you know what’s great? You don’t need a lot of money to visit!