Many of you think that you have to travel far away to spot Aurora Borealis but actually, Northern Lights in Alaska are closer to you than you ever imagined.

The northern part of Alaska is one of the best places where you can see the Green Lady dancing in the sky, especially for those of you living in the United States. 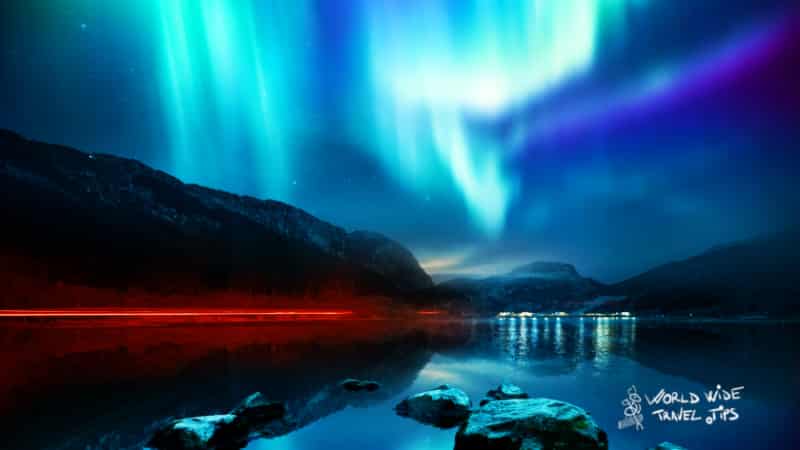 What exactly are the Northern Lights?

Northern Lights or Aurora Borealis is an astronomical phenomenon also known as polar lights and consist of coloured curtains or shafts which occasionally appear on the night sky.

This phenomenon can be found not just on the northern hemisphere but also on the southern one and the last ones are called aurora australis.

Now, let me explain to you briefly what this astronomical phenomenon is and where everything starts.

Well, everything starts on the surface of the sun when solar activity releases a cloud of gas.

If one of these clouds of gas hits the Earth ( it took them 2 or 3 days to reach Earth) it collides with the Earth magnetic field.

At that moment, a complex change happens to the magnetic tail region which generates currents of charged particles.

These magnetic particles flow along lines of magnetic force into the Polar Region and when they collide with oxygen and nitrogen atoms they produce the incredible Aurora light.

In order to see the Aurora Borealis three conditions should be met:

Do the Northern Lights happen every night?

Theoretically, there is no season and there are no specific nights when you can spot the Aurora dancing in the sky.

This natural phenomenon is almost always present in the sky, day at night, but the only thing is that during the day you cannot see it with your eyes.

The natural process which causes the appearance of the polar lights on the sky is constant as charged particles from the sun constantly hit atoms in Earth’s atmosphere and release protons. 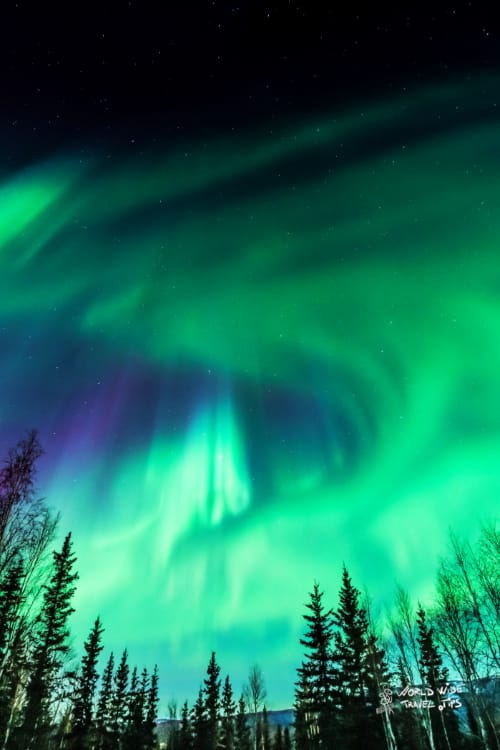 So, the answer to this question is yes, it happens every night but the phenomenon is not visible from everywhere on Earth.

Actually, the best time of the night to spot the polar lights are between midnight and 3 a.m, if the factors are lined up for the show.

Places like Alaska, north Canada, Iceland, northern Norway, Sweden, Finland and northern Russia are the best places where you can observe these lights.

Where is the best place to see the Northern Lights in Alaska?

But Alaska is quite a big territory so you need to know which are the best places to see Aurora Borealis in Alaska.

The polar lights are visible from all over the area, from Barrow to Ketchikan and your chances of seeing them constantly increase as you get closer to the Polar Circle.

Still, if I would have to name a region from where the lights are more visible and appear more often that is for sure Fairbanks Alaska.

Fairbanks is one of the best locations for seeing Alaska Aurora Borealis mainly because of its location, as it is located under the “Aurora Oval”.

Auroral Oval is the ring-shaped zone over the far north where aurora activity is concentrated.

Another reason why Fairbank is great for spotting the Green Lady is that the level of precipitations is low and the distance from coastal areas also contributes to many clear nights. 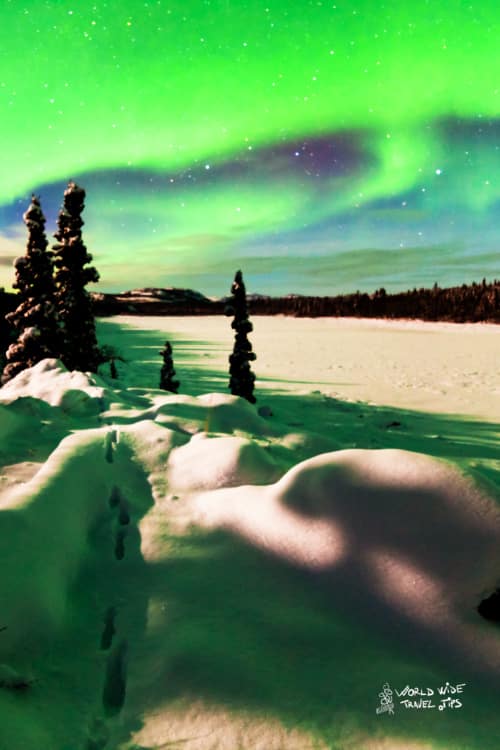 If you take all these elements and put them together you will see that the above criteria are fulfilled and you will quickly understand why Fairbanks is perfect for hunting Aurora Borealis.

It is said that during the Aurora season you don’t have to spend more than three nights in Fairbanks to see the Green Lady dancing in the sky.

Good places to head to if you are chasing the Green Lady in Alaska are:

The southern part of Alaska also experiences auroras, but the frequency falls off as you go further south.

More than that, because the climate of that part of Alaska is specific to the rainforest, it means that the clouds are more present in the sky, so the chances of seeing the sky show diminish.

When is the best time to see the Northern Lights in Alaska?

The Aurora Borealis in Alaska occur during the entire year but they are harder (almost impossible to see) under the Midnight Sun.

That is why the best time when you can see the Northern Light in Alaska is between mid-August to April when the number of dark hours is increased.

Forecasting the Alaska Northern Lights means the scientists have to predict the intensity of solar activity, which is almost impossible with the current technology. 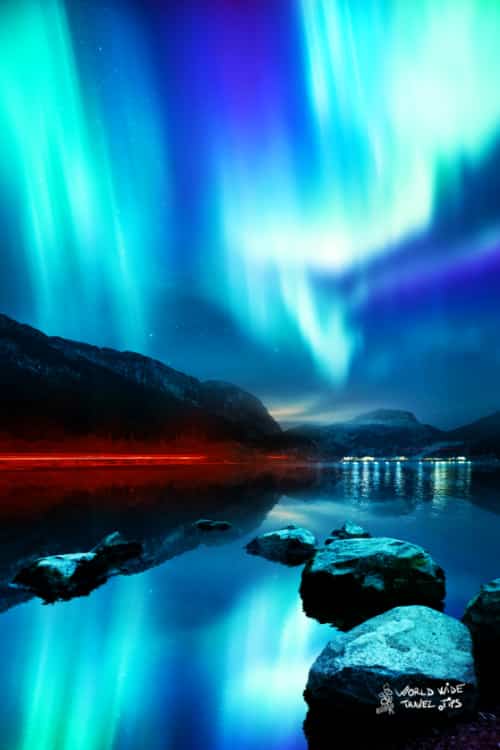 However, what we know for sure is that for seeing Alaska Aurora Borealis you have to be located between 65 degrees North and 70 degrees north latitude.

And Fairbanks is located about 180 miles south the Arctic Circle and you can enjoy many nights viewing the Northern Lights.

Those of you who really want to maximise their chances of seeing Aurora Borealis in Alaska should head to more remote areas like Coldfoot in the Yukon territory or to Prudhoe Bay and Utqiagvik in the extreme north.

From September to April, the further north you go in Alaska, the higher chances you have to see the northern lights.

Where in Alaska do you stay to see Aurora Borealis?

Alaska and especially Fairbanks are full of places where you can stay when planning to chase Alaska Northern Lights.

But not quite all accommodations are perfect for seeing and chasing Aurora Borealis.

I recommend you to stay at remote locations, far from any light pollution to maximise your chances.

Just imagine how amazing it would be to stay in your bed and observe the Northern Lights show in the sky!

From the hotels and villas mentioned below all this is possible:

1.Auroravilla Alaska Fairbanks , a very quiet and clean lodge located far from light pollution with cosy apartments from where you can admire the aurora during your stay.

2. A Taste Of Alaska Lodge is a beautiful lodge located 30 minutes outside Fairbanks and offers one of the best views of the aurora. During the day you can walk, ski, go ice fishing or take a dog mush, while at night admire the stars and the Alaska Northern Lights dancing on the sky.

3. Luxstay Views Waterfront Alaska is a wonderful apartment overlooking the lake, just 3 miles away from the University of Alaska Fairbanks (where is located the geophysical institute) which offers an amazing view of the lake and the surrounding area and a great patio from where you can admire the lights during the night.

You can choose to chase Alaska Northern Lights on your own or to get a guided tour which takes care about everything.

For those of you who want to focus on photographing and admiring the polar lights without wasting the time on planning and finding the best places to spot this unique phenomenon I recommend the following tours:

1.From Fairbanks: Northern Lights and Arctic Circle Tour which is a complete day tour which starts at 2 p.m and lasts for 14 hours.

You will see the imposing Yukon River Bridge while travelling along the famous Dalton Highway to the Arctic Circle.

2. Northern Lights and Chena Hot Springs – Night Tour which is a small group tour that starts at 5 p.m from your hotel and lasts until late in the night.

You will relax in the famous Chena Hot Springs and then pay a visit at the Ice Museum’s handcrafted chandeliers and bar and then prepare your camera for taking some amazing photos of the Aurora Borealis reflecting in Chena Lake.

These elusive lights are pretty hard to spot even during the winter season so you need to plan everything in advance and keep an eye on aurora forecast and best time for aurora viewing.

But once you see this magnificent show you will be fascinated about it and will change your life forever!

Dress up warm and take your camera with you to catch this wonderful natural phenomenon to remember later!