Things to see in Paris

The city of love and one of the most visited places on Earth, Paris is a great destination not just for a city break but also for your holiday.

You can spend here at least 10 days and there will be still many places to visit and a lot of things to do… that amazing this city is!

There are hundreds of attractions spread all over the city but some of them stands out and are famous everywhere in the world! 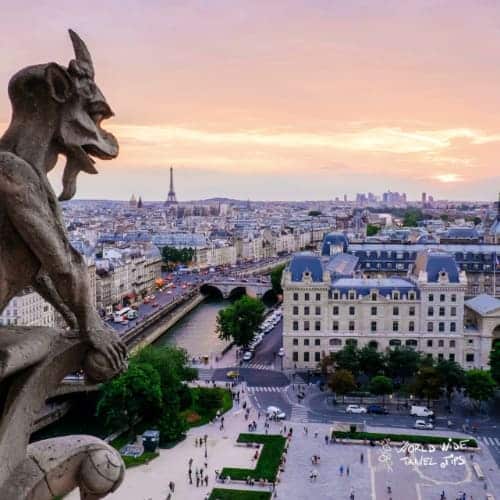 Our advice is to start your tour with the most famous ones and then if you have enough time you can explore the city on your own and discover its mysteries and some magnificent places known only by locals.

To be easier for you when planning your trip, I prepared for you a list with the most important places to visit when in Paris:

This is one of the most copied monuments from the entire world. Many countries from all over the world have copies or replicas of this monument.

It is an architectural masterpiece and the symbol of Paris.

The tower was built in 1889 bu Gustave Eiffel and is the most visited place from Paris. 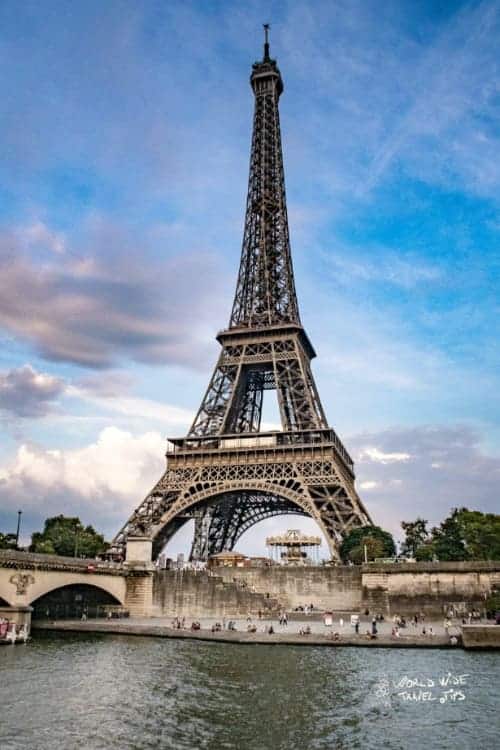 If you plan to visit this tower book your tickets well in advance. The queue is huge; you might stay 2 or 3 hours in the line waiting to get in.

We recommend you to be one step ahead of the crowds and jump directly to the second level with Eiffel Tower: Second Floor Direct Access.

This tour gives you direct access to level 2, unlimited time inside the Towel and a historic presentation of the monument. 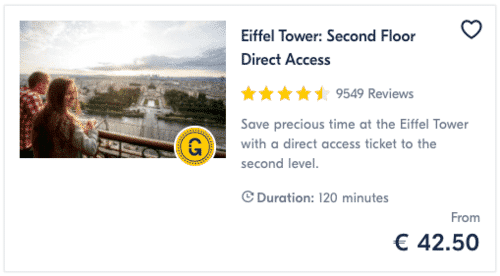 The world largest art museum in the world, the Louvre, one of the best things to see in Paris is a huge museum where you can spend days admiring the artworks displayed inside.

The Louvre was once home to French Kings and in the 18th century, during the French Revolution, it was transformed into a museum. 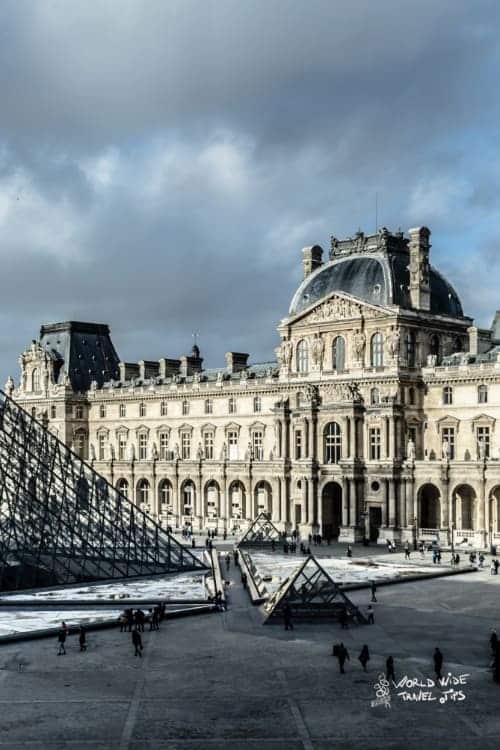 Among the most famous artworks displayed here are: Mona Lisa, Venus de Milo and Winged Victory.

Here, as for Eiffel Tower, the queue can be epic. If you don’t buy tickets in advance you can stay many hours in the queue.

I know that sometimes planning might be difficult and for those of you who have a problem with planning their holiday, we recommend you to book a ticket at Louvre Museum Skip-the-Ticket-Line Guided Tour.

This is a guided tour of the Louvre Museum with a very carefully planned itinerary which gives you the opportunity to see the highlights of the Museum and to skip the long queue from the entrance. 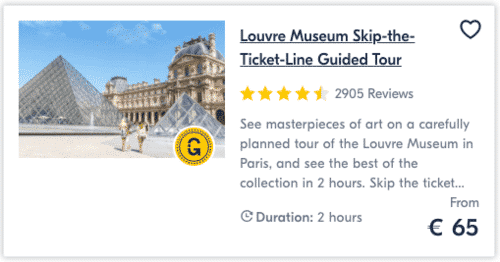 Located right on the top of Champs Elysees, Arc the Triomphe offers one of the best views from the entire city and one of the most interesting things to see in Paris.

From the top of the monument, you can see the Louvre, Champs Elysees, Eiffel Tower and the whole city of Paris from above. 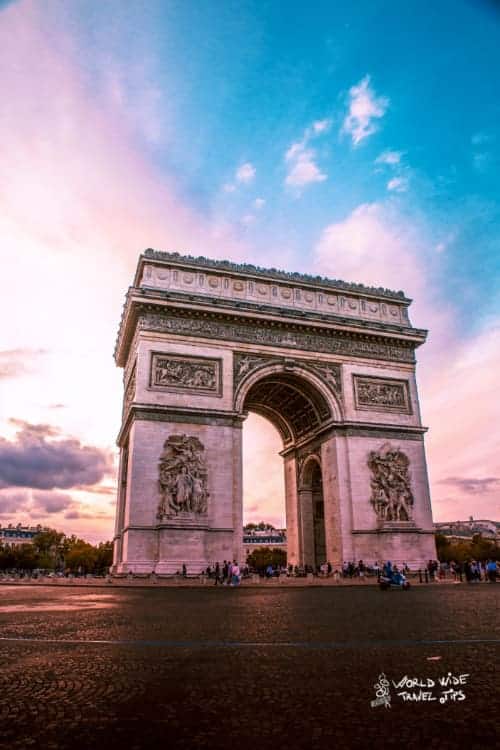 One of the best moments to climb to the top of the monument is during the evening when everything is light up. The Eiffel Tower and the Champs Elysees offer a wonderful view from the above!

The monument might be crowded especially during peak season!

If you want to gain precious time we recommend you to book a ticket at Paris: Skip-the-Line Arc de Triomphe Rooftop Tickets which gives you direct access to the top of the Arc de Triomphe. 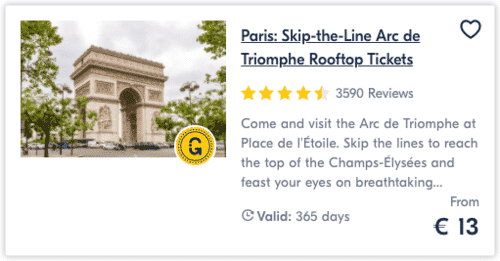 What could be more romantic and charming than a walk along the Champs Elysees boulevard?

Yes, it is true that you together with other thousands of tourists are about to do that, but still, it is a thing you should not miss when in Paris. 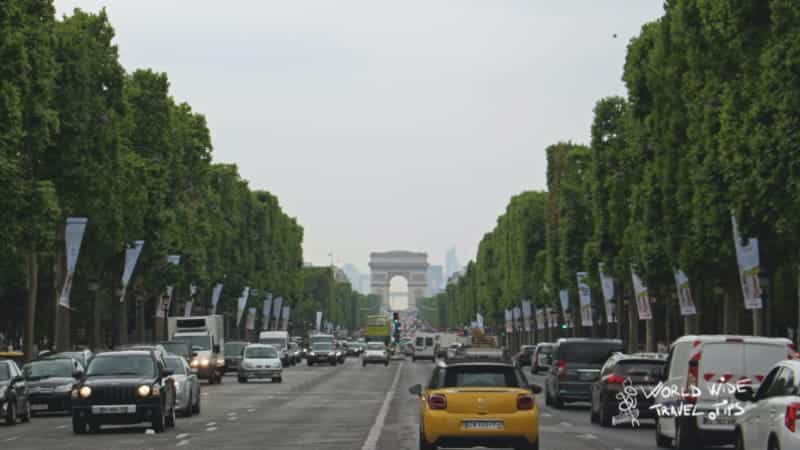 Champs Elysees is considered to be the most famous commercial street in the world. It connects Arc de Triomphe with the Place of Concorde, has 1.900 metres long and 70 metres width.

Pont Neuf is the oldest bridge over the Seine and one of the most emblematic things to see in Paris.

The initiative of building a new bridge across the Seine belonged to Henry II in 1550 who asked to build a new bridge in the area. But because the expenses were too high, the project was postponed. 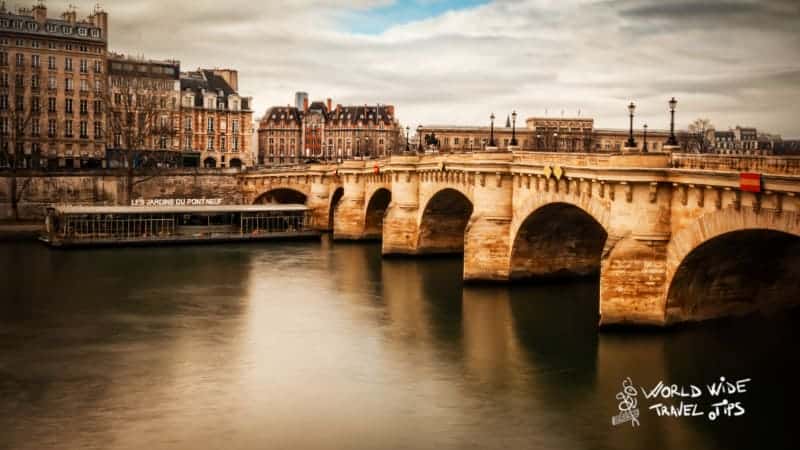 In 1578, during the reign of Henry III, the bridge was built. Over the years, consolidation works took place and it stands out as it is today. The last restoration works last for 13 years, between 1994-2007.

The largest round-about from Paris located between Tuileries Garden and the Champs-Elysees is known as Place de la Concorde.

This place has a very important role in French history. Here, in this place, during the French Revolution, King Louis XVI, Robespierre and Marie Antoinette were executed by guillotine. 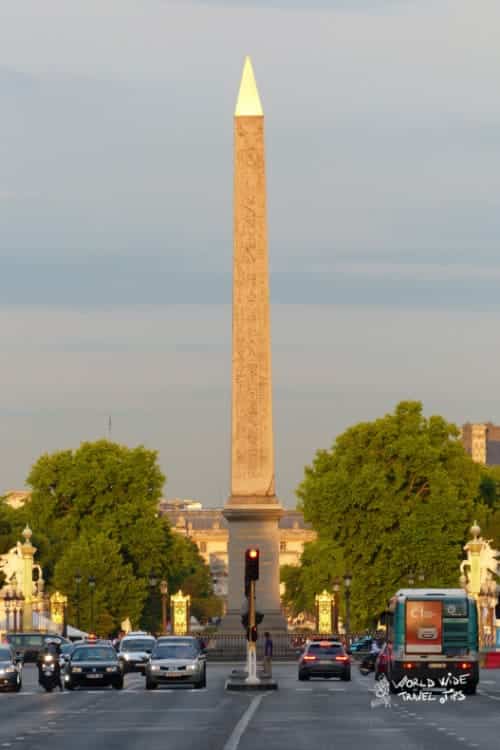 In the centre of the square a huge Ferris wheel is constructed and if you are interested in a wonderful view of the city consider taking a ride when in Paris. The wheel is working from early May to mid-November.

One of the most epic things to see in Paris is the Versailles gardens and the palace. 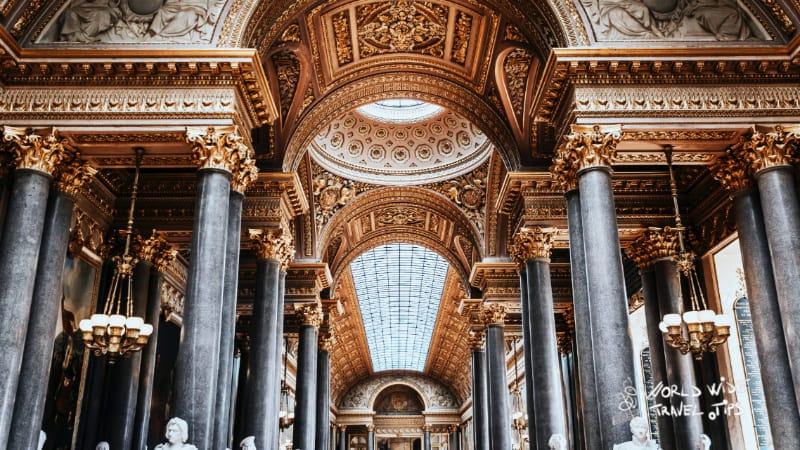 This royal chateau is located outside Paris. It was built in 1682 as a royal residence by King Louis XIV who moved its Royal Court from the Louvre to the Palace of Versailles.

The palace was home of french government until 1789 when the French Revolution started.

By 1789 the monarchy came back to Paris and the palace was open to the public. In our days the palace can be visited by tourists on a daily basis, except for Monday when it is closed. 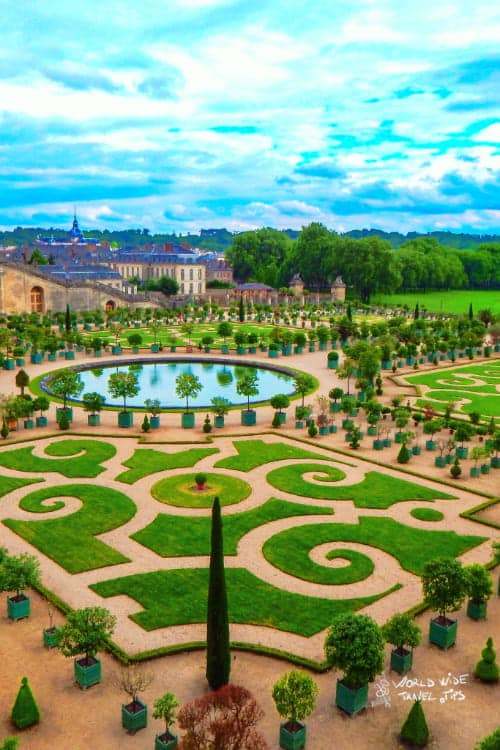 Being one of the most beautiful palaces in the world and a top attraction for many tourists, the palace might become very crowded, especially during peak season.

We recommend you book a tour in advance to secure your place. Versailles Palace & Gardens Full Access Ticket & Audio Guide is a 1 or 2 days ticket to the palace and to the whole domain which allows you to explore the domain and learn new things while listing to the audio guide provided at the entrance. 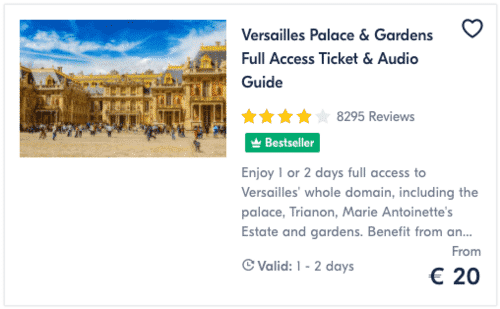 A great way to relax and enjoy an evening in Paris is by going to Moulin Rouge. It is the most famous cabaret in the world with colourful can-can dancers and a vibrant atmosphere. 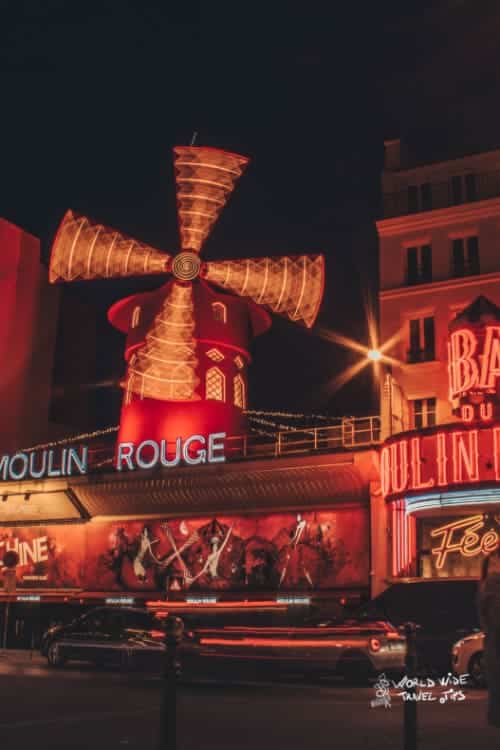 The initial cabaret was built in 1889 by Charles Zidler and Joseph Oller and it burned down in 1915. A few years later it was reconstructed and it is what you see today.

This certainly is one of the things to see in Paris!

As always, I recommend you to take a cruise and admire the city from the water. You will get a totally different perspective over Paris from your boat. 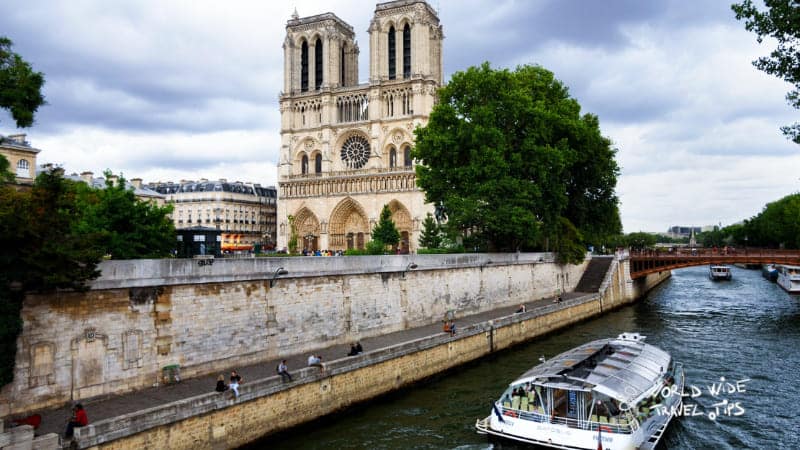 This is a very relaxing way to enjoy your time spent abroad.

Paris: 1-hour River Seine Cruise is our recommendation when visit Paris! You get one hour cruise with an audio guide who will tell you all you need to know about the places you are about to visit! 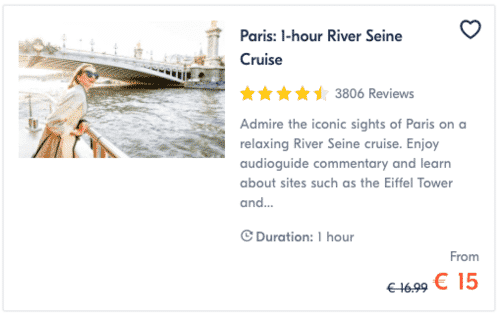 A real labyrinth of tunnels full of human bones can be found under the streets of Paris. These are the human remainings of more than 6 million inhabitants of the city who died in Paris in the 18th century and before.

By the end of the 18th century, the population of Paris increased and they need space for houses. That is why the decision of moving the cemeteries on the underground was taken. 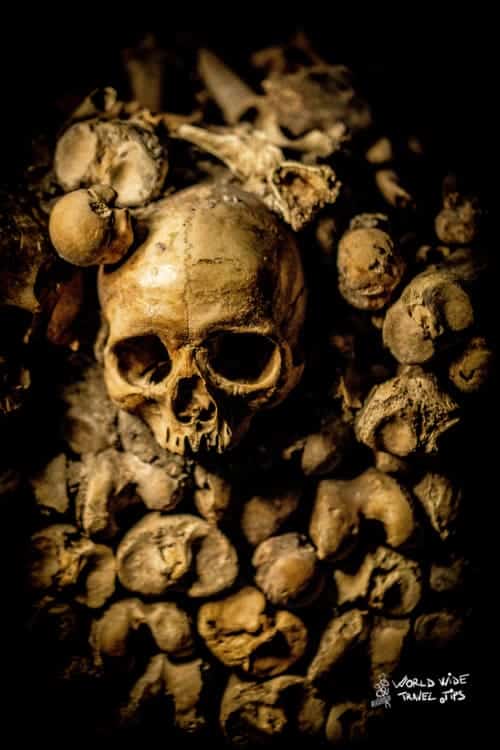 It is one of the largest catacombs from Europe and people stay in a queue for hours to get beneath the streets of Paris and see the human bones.

In our days the Catacombs are one of the most interesting things to see in Paris!

The main downside of the place is that it is too crowded! Usually, the last 2 hours before the closing time are less crowded, but if the queue is very long you might not enter.

One of the oldest and most beautiful cathedrals in the world is now closed for the public.

On April 15, 2019, a devastating fire took place and almost the entire cathedral is destroyed. Reconstruction workings are in progress and the monument is closed until further notice. 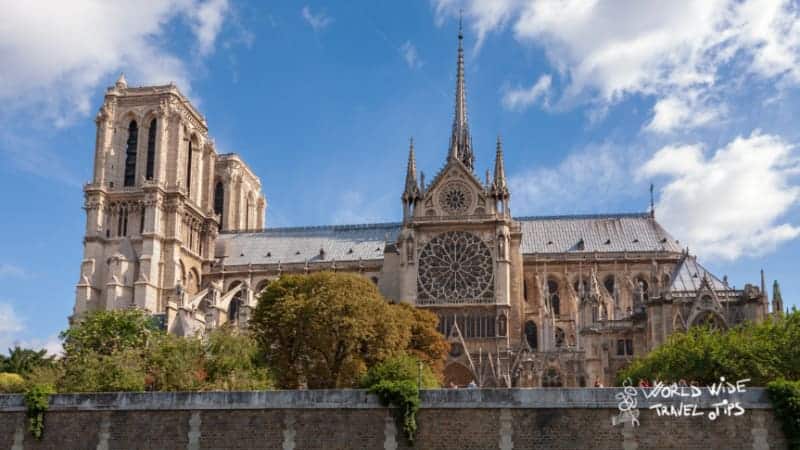 When in Paris you can take a walk and admire the beautiful monument from the outside, but inside access is forbidden.

These places are the most interesting attractions you can visit when in Paris.

Many more places, not that touristy and famous waiting to be discovered!

For your first time in Paris we recommend you to visit these places and after that, if you have time explore the city on your own and discover its beauty and charm!

Great list! I would love to go back to Paris because I haven’t done so much there.

Hi Katrina and thank you for your words! Paris is a very romantic and beautiful city and has many interesting places to see! Hope you'll have enough time to see more of its attractions on your next trip to Paris!