The Mount of Olives or Mount Olivet as it is also known is more a hill located in right near Jerusalem Old City. The name came from the olive trees that once covered that part of the town. Each church on Mount of Olives is extremely old and mark important moments from the Bible.

Actually, there are not just one but there are 6 important churches on the slopes of the mount. Let’s discover together which are these churches and their role along time. 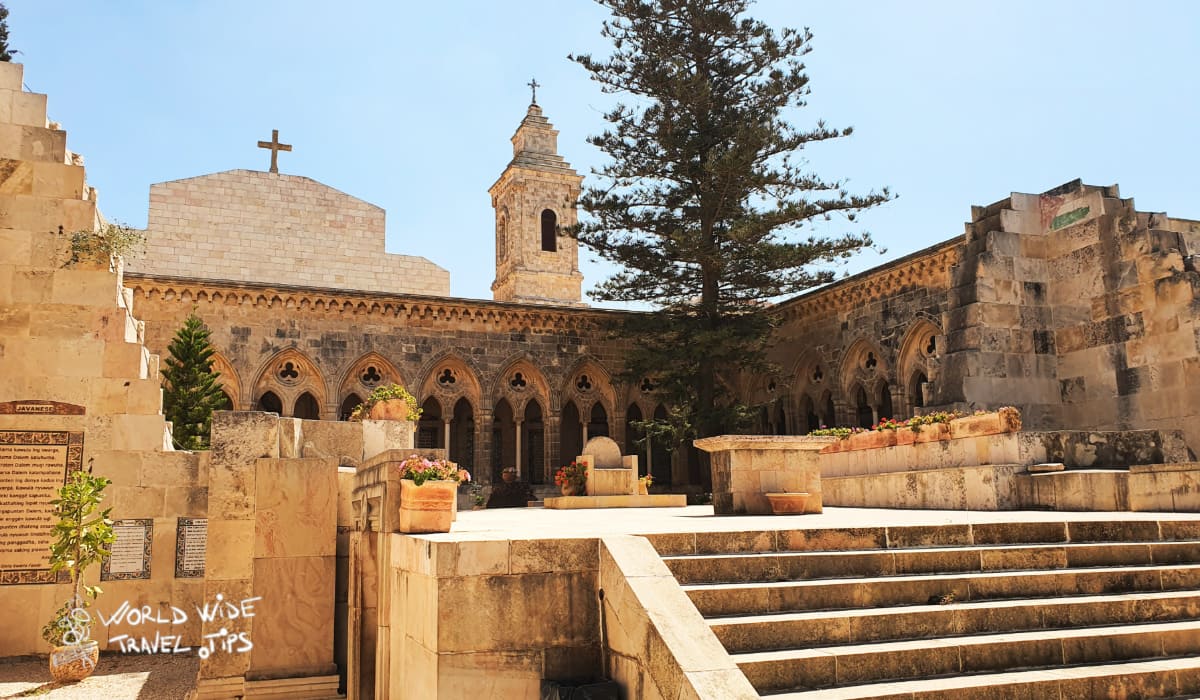 1. Church of Mary Magdalene or the Russian Orthodox Church

The distinctive sign of the construction is the 7 gold domes shining in the Israeli sun all day long. It is impossible not to see it when you visit the hill. It is a beautiful church Mount Olives has located in the western part of the hill and was completed in 1888.

The place was built by Sergei’s Grand Duchess Elizabeth Fyodorovna who lived in the city of Jerusalem for a short period of time.

During the construction of the church, the workers discovered a set of stones carved in the rock. It is believed that these are the steps on which Jesus walked when he went to Bethany.

Today, the steps are considered to be sacred and are venerated by Christian pilgrims.

2. The Evangelical Church of Ascension

The Augusta Victoria Compound on the Mount Olivet is the Evangelical centre for pilgrims and tourists who visit Jerusalem.

By the end of 18th century, the German Emperor Wilhelm II and his wife Empress Auguste Victoria visit the Holy Land.

They were so impressed by the area that they asked the permission to the German congregation to build a hospice right on the Olives Mountain.

Today the hospital was transformed into a clinic which treats cancer, ear, throat and nose diseases.

3. Mount of Olives Church of Ascension

The Chapel of Ascension is the most important church on Mount of Olives. It is built on the highest point of Jerusalem, at 850 metres above sea level and almost 1290 metres above the Dead Sea.

The initial dome was constructed in 330 AD and marks the place where Jesus is thought to have ascended to heaven.

A piece of stone with an embedded footprint which is believed to be Jesus footprint as he stepped up to heaven can be found in the sanctuary.

The initial structure was destroyed almost entirely by Persians in 614 AD and rebuilt by Crusaders. 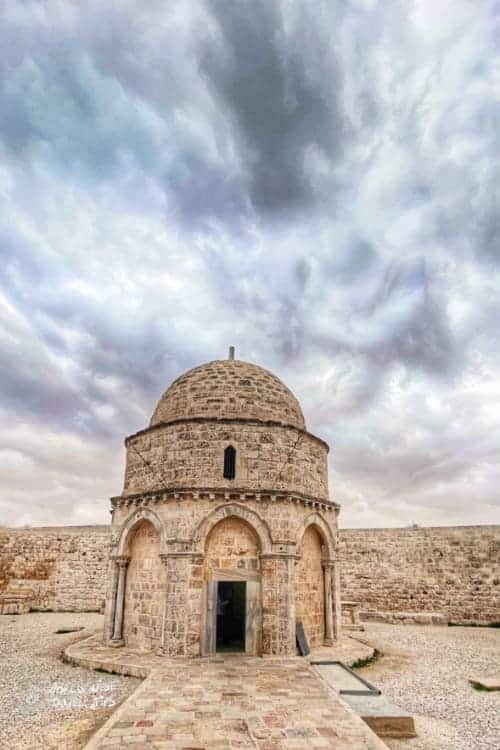 the Chapel of the ascension Jerusalem

What you can see today was built using the Wilhelminian-Byzantine style. An interesting architectural element is located on the western facade where a second wall was built to protect the sanctuary from strong winds and rainfall.

The tower of this church is a unique structure with 45 metres high. The tower ring in the tones sol, ti, re and mi which harmonize with the bells of the Basilica of the Dormition Abbey and the Church of the Redeemer in the Old City.

An interesting element of the church is the pneumatic organ which was built by Sauer Company in 1910 and it is still functional in our days. This is unique in the region.

4. Church of All Nations (Basilica of the Agony)

This is for sure the most beautiful Mount of Olives church and It is very easy to recognise after the gold mosaic from the facade.

The church is located at the bottom of Mount Olivet, adjacent to the Garden of Gethsemane and it is believed that this was the place where Jesus prayed on the night when he was arrested.

There is a large rock right near the altar marking the place where Jesus prayed.
This church on Mount of Olives was founded by 12 nations and that is why it is so-called.

The sanctuary was built in 1924 by an Italian architect named Antonio Barluzzi. The interior design is unique and is a perfect mixture of Islamic architectural elements like domes and Christian basilica in the front.

5. Pater Noster (The Church of the Lord’s Prayer)

This monastery is built on the place where is it believed that Jesus has taught his disciples the Lord’s Prayer. Right near the church is a cave; this is the place where the biblical event has occurred. 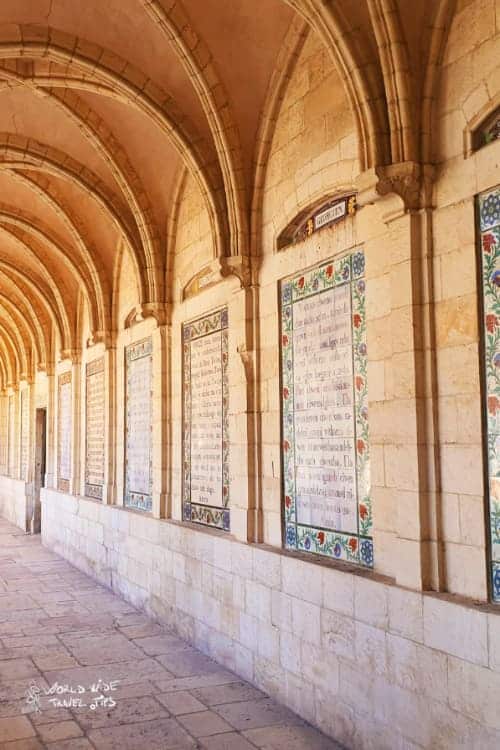 The sanctuary which can be seen today was built in 1874, the year when the previous church was destroyed completely.

Today, the church is run by the Catholic church Carmelite Cloistered Sisters.

This Mount of Olives church was drawn by Anton Barluzzi and built-in 1955. The shape of the church is like a teardrop and reminds the Christians about the moment when Jesus wept as he foresaw the destruction of the Jerusalem city.

This is a Franciscan church and is located right between the Church of St. Mary Magdalene and Tomb of the Prophets.

These are the most important church on Mount of Olives. Besides these monuments, there are also some very important tombs like the Tomb of the Prophets and the Tomb of Mujir al-Din al-Ulaymi. There is also the Garden of Gethsemane, the place where Jesus was captured and sold for a few dinars.

Mount Olivet and its constructions played a very important role for Christians and is considered to be a sacred place.

You can choose to visit by yourself or you can book a tour with a professional guide. We visited the mountain by ourselves and then with a guided tour booked from here: New Jerusalem: Mount of Olives Tour. 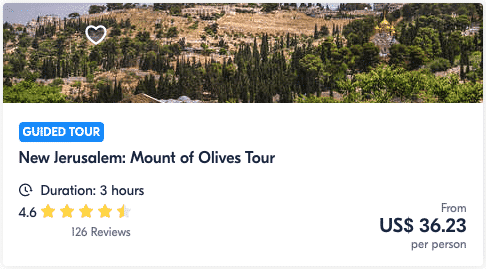 The tour starts at 2 p.m and lasts for 3 hours. Visiting all major attractions from the Hill are included and you will find a lot of interesting information about each place. You will understand many things and see these attractions with different eyes by the end of the tour.

Where to sleep close to Church on Mount of Olives

There is a hotel located right on top of the Hill near Mount of Olives church but I do not recommend you to sleep there because the conditions are not the best.

You’d better sleep in the city centre and take public transport or a taxi to the top of the hill. We stayed at Orient Jerusalem By Isrotel Exclusive Collection a 5 stars hotel located within walking distance from Old Town of Jerusalem and 2.5 kilometres away from Mount Olivet.

We liked this hotel very much because the services were really great; the rooms were clean and the food was exactly how it should be: tasty, fresh and varied.

A day is enough to fully explore the hill and the church on Mount of Olives.

Take with you water, a sun hat and sun cream and go to see with your own eyes the magnificent church Mount Olives has!