Monkeys from Costa Rica can be found mainly in the remote forests located all across the country and if you want to see them keep an eye up in the trees.

Costa Rica is a place with rich wildlife and impressive flora and more than 25% of the total surface of the country is occupied by protected areas and national parks.

After reading this article you will be able to immediately identify all 4 species of monkeys Costa Rica has and you will know exactly where to go to see them.

There are 4 types of monkeys in Costa Rica:

Now let me tell you a few words about each species and which are the best places to go to see the beautiful monkeys of Costa Rica. 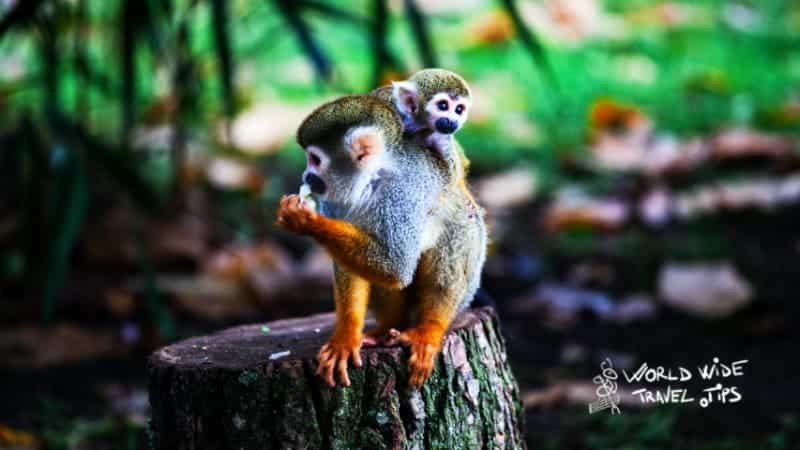 Howler monkeys can be found in the tropical rainforests and dry forests from all over the country and eat only fruits, flowers, and leaves.

They have a black body with a yellowish hue at the sides and have very prehensile tails which are used to move around the canopy.

What is specific to this species of monkeys is the noise they do which can be heard from miles away, a very loud howling sound that can be quite scary when you hear it for the first time.

Males are larger than females and their sounds are quite impressive and they howl in order to communicate within the troops and with other rivals.

These creatures generally howl at sunrise and sunset, but it is quite common to make loud noises when they see people, dogs or when outside is raining. 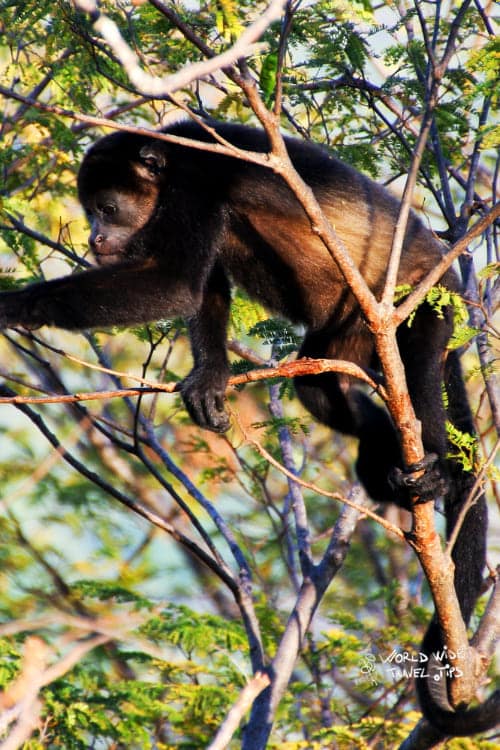 This is one of the most common Costa Rica monkeys and can be found in many of the protected areas of the country.

Howler monkeys live up to 25 years and their main predators are jaguars, harpy eagle, and boa constrictor.

Besides this factor, the massive deforestation and the zoo industry had a negative impact on the number of animals that can be found in the wild.

If you want to observe these cute creatures from Costa Rica in their natural environment, then head to Arenal Volcano National Park, Cano Negro Wildlife Refuge, or Barra Honda National Park, where there are many of them.

The Osa Peninsula is another popular place for seeing these creatures in their natural environment, as well as Manuel Antonio National Park, Nicoya Peninsula, Guanacaste, Monteverde cloud forest, and the Caribbean coast.

Howler monkeys are one of the Costa Rica monkeys on the beach so head to Tamarindo, Conchal, Ocotal, and Hermosa to spot them close to the water.

So you are just a few minutes away from Manuel Antonio National Park, the most popular national park of Costa Rica, packed with incredible animals and beautiful flowers and trees.

Another species known as the New World monkey is the spider monkey that can be found in the rainforests and dry forests from Costa Rica as well as the mangrove forests from the country.

This reddish-brown monkey with black feet and prehensile tails that can support the whole body weight is one of the biggest New World monkeys.

It might weigh up to 9 kg and have anywhere between 100 and 150 cm long with a tail longer than its body.

An interesting thing about these monkeys of Costa Rica is that they don’t have the thumb finger; they only have 4 fingers in each of their hands.

Females generally weigh less than males and have longer tails that are used to move around the canopy.

Their name, spider monkeys come from their look that is characterized by their disproportionately long tail and limbs. 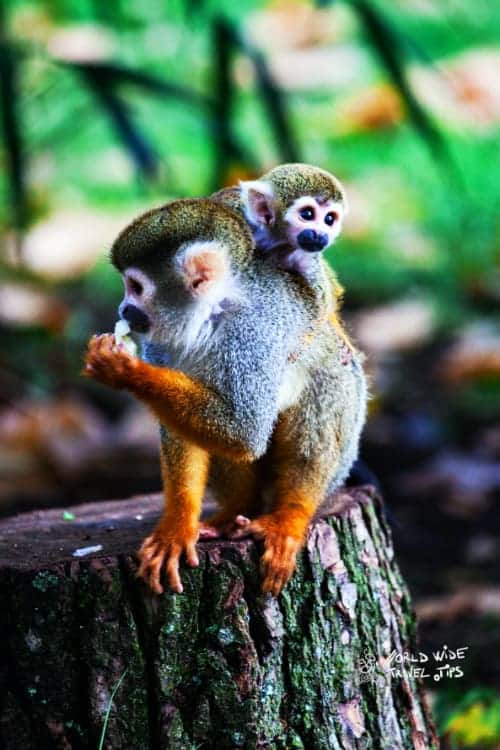 Spider monkeys that live all around Central America are extremely social animals and they generally live in troops formed by more than 35 creatures.

In rare cases when there are not enough monkeys to form a troop, spider monkeys can join a troop of white face monkeys.

During the day they spread around searching for food, while during nighttime they come together to protect each other against predators like jaguars, boa constrictor, or harpy eagle.

Their menu consists of flowers, fruits, and leaves, and sometimes insects and they live almost their entire lives in the upper part of the trees.

These animals are extremely intelligent and they have a wide range of sounds that are used to communicate like screaming, barking, or whining.

Like other species of monkeys from Costa Rica, spider monkeys are considered to be an endangered species because of excessive hunting and continued restriction of the territory.

Spider monkeys are quite easy to see in Corcovado National Park and in the protected areas around the Osa Peninsula.

They also live in Rincon de la Vieja National Park, Monteverde Cloud forest, and Tortuguero but here they are less common and hard to spot.

Book a few nights at Crocodile Bay Resort Costa Rica a 4-star hotel hidden in Corcovado jungle with a beautiful outside pool and great restaurant and hire a guide to spot these beautiful creatures.

You are very familiar with these creatures as they are commonly used in movies as they are extremely intelligent and very easy to train.

They generally live in the Costa Rican mangroves as well as the rainforest and dry forest areas, too.

With a maximum weight of 4 kg and an average length of 75 cm, white-faced capuchin monkeys are quite small compared with spider or howler monkeys.

The diet of these monkeys from Costa Rica is quite varied, from fruits and flowers continuing with bird eggs, insects, small vertebrates, and even larvae.

Capuchin monkeys Costa Rica live in troops of 15 up to 38 individuals and each troop has an alpha male and an alpha female. 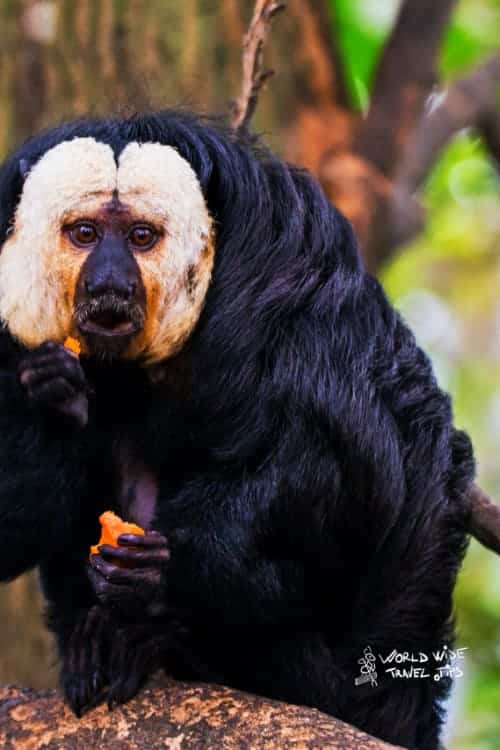 They search from food at the ground level of the forest up to the canopy and spend most of the day hidden between the branches of the tropical trees.

An interesting thing about these monkeys is that they learn very easily and naturalists observe white faced monkeys using tools to procure their food and adapting their behavior to human behavior.

Monteverde Lodge And Gardens Costa Rica is our recommendation for those of you interested in observing these incredible creatures in their natural environment from Monteverde Cloud forest.

This tiny creature that weighs just about 1 kg and has a maximum length of 60 cm lives only on the southern coast of the Pacific in Costa Rica and Panama.

As they are so tiny they have many natural predators, so numbers are everything about these reddish back and black tail creatures.

These beautiful monkeys in Costa Rica live in large troops of almost 80 individuals and they move really quickly through the trees using their tails as a balancing tool.

Squirrel monkeys can live up to 20 years and among their main natural predators are wildcats, venomous snakes, falcons, and boa constrictors. 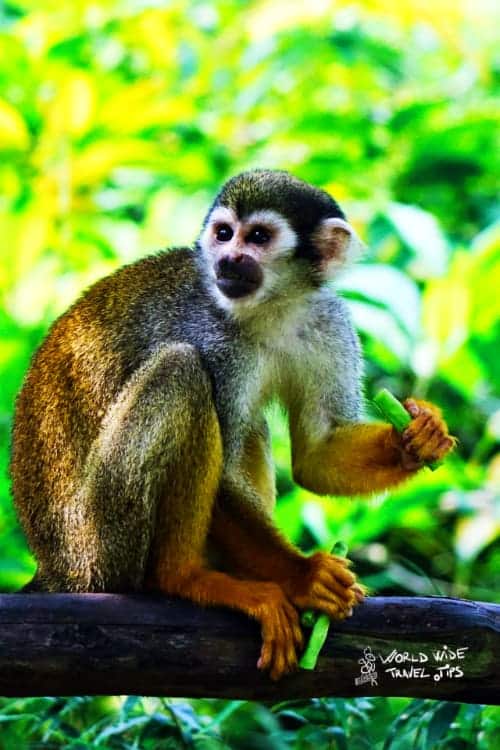 In order to communicate with the individuals from the troop, these monkeys use vocals and send some very interesting warning calls.

Their diet consists of seeds, bird eggs, and nuts, as well as insects and flowers and they, spend most of their lives in the trees in the top canopy level.

This is the smallest, the rarest, and the most endangered species of monkey from Costa Rica and can be seen in Manuel Antonio National Park and in the Osa Peninsula and Golfo Dolce located in the Southern Pacific.

Book a few nights in the area around Manuel Antonio Park at the beautiful hotel Arenas Del Mar Beachfront Manuelanton Costa Rica as it is located right on the beach, close to the national park and you can spot wildlife even from your room.

Get the travel guide now

Definitely, Osa Peninsula is the best place to spot the monkeys from Costa Rica, while Corcovado National Park is the only park from the whole country where you can spot all 4 species of these monkeys.

Include in your Costa Rican holiday at least one day trip in one of the many protected areas from the country and prepare yourself for amazing wild encounters.